Home Hidden Items The Scepter of Azj’Aquir: Uncovering the history of Ahn’Qiraj 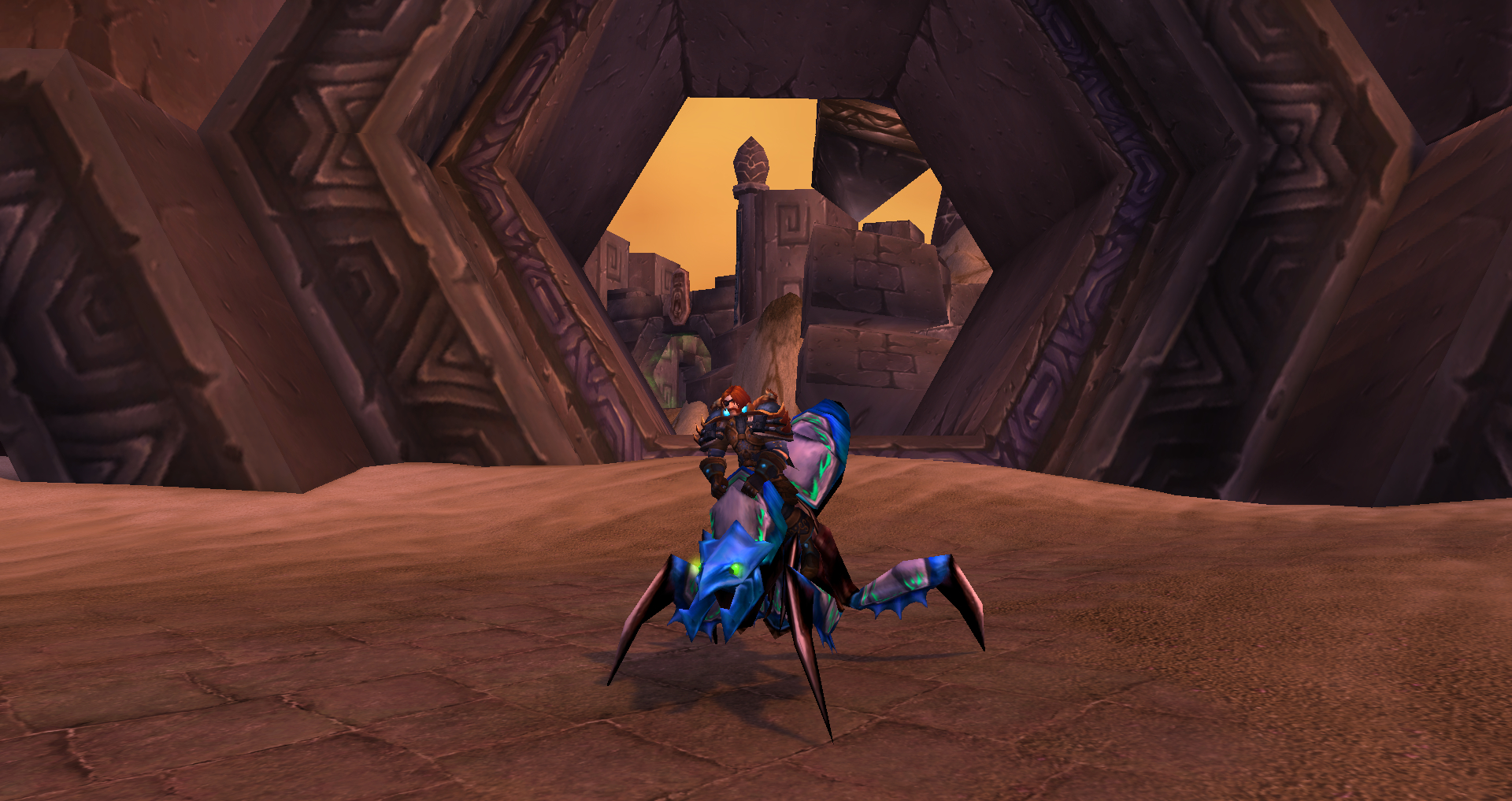 Hiding beneath the sands of Silithus the remnants of the Qiraji empire scuttle to and fro. January 21-23rd marks the Call of the Scarab, an in game event commemorating the first ringing of the Scarab Gong. This marked the opening of the gates of Ahn’Qiraj and the beginning of the Alliance and Horde’s war with the Qiraji Empire; which culminated in the death of the Old God C’Thun in the Ahn’Qiraj raid.

The gong could only be rung by players who had completed a long questline that took them through the previous two raids (Molten Core and Blackwing Lair) and made them kill deadly world bosses like Doctor Weavil, all while racing against other players on their realm.

The reward for being the first player to ring the gong on each realm was the Black Qiraji Battle Tank, the first (and only) legendary mount ever available to players. A purple and gold silithid; this mount was unique not only for it’s legendary status, but because it was the only silithid mount usable outside of the Ahn’Qiraj raid. Having a mount that was usable in Ahn’Qiraj was important: the raids massive size meant players had to run an incredibly long distance after wiping on later bosses, and Silithids mounts were originally the only mounts usable within the fallen city.

For players who didn’t get the legendary Black Silithid, there were four less prestigious mounts available. These are the Blue, Green, Yellow, and Red Qiraji Battle Tanks respectively, all of which are dropped by trash mobs within the raid. The four resonating crystals still drop today, and each one allows you to add its respective mount to your mount journal. The mounts count towards collecting achievements, but can still only be used within Ahn’Qiraj.

But fret not fellow entomologists! The Cataclysm unearthed heartier breed of Silithid! While the Black Qiraji Battle Tank was the only silithid mount useable outside of Ahn’Qiraj from Vanilla to Wrath, the Cataclysm brought Archaeology; and with it a sturdier silithid.  The Ultramarine Battle Tank shares a model with the Blue Battle Tank available in Ahn’Qiraj, but unlike it’s blue counterpart this new silithid can be used anywhere in Azeroth like a normal ground mount.

In order to obtain this mount for yourself you’ll need The Scepter of Azj’Aqir, a Tol’Vir sorcerer who mastered summoning Silithid outside the kingdom of Ahn’Qiraj. The scepter is a rare find from Tol’Vir archaeology. Tol’Vir archaeology fragments are found only in Uldum, but share a spawn table with all Kalimdor digsites, meaning if you want to farm Tol’Vir artifacts you’ll need to cycle through all types of Kalimdor digsites to get them to spawn.

It’s unknown whether you need a specific level of archaeology skill to find the scepter, as in all likelihood you’ll reach the maximum archaeology level long before finding the scepter. But stick with it, and eventually you’ll uncover the scepter and command a silithid of your very own!

While it may not be as unique as it’s famed black counterpart, the Ultramarine Qiraji Battle Tank and it’s corresponding Scepter make a fine addition to any explorers collection; not only because of it’s extensive lore, but because it’s also just a really cool mount!

So whether you seek the scepter for lore or for looks, I wish you good luck as you sift through the sands.