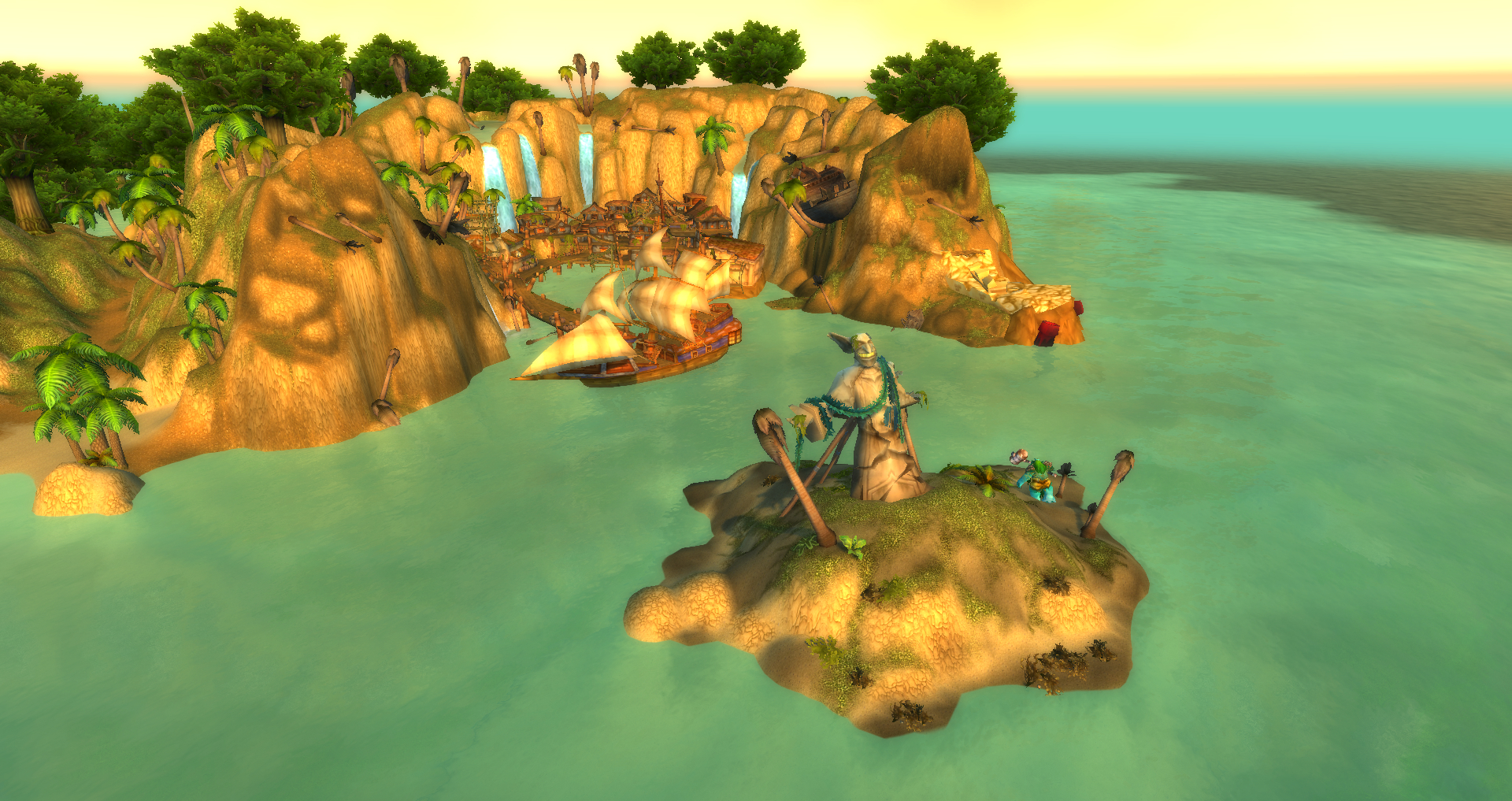 On a small island in Booty Bay harbor the statue of a smiling Goblin, arms outstretched, has greeted travelers entering the Bay since Vanilla.

Made to resemble the Christ the Redeemer statue in Rio De Janiero, the goblin statue on Janeiro’s Point has been an iconic landmark in WoW for the entire life of the game. With the zone revamp in Cataclysm, Booty Bay was struck by a massive tidal wave; multiple changes were made to the city to reflect damage from Deathwing’s return.

The statue took the brunt of the damage; seaweed now drapes across it, it leans backwards propped up by wooden poles, and most noticeably it’s right arm has been broken off. The missing arm revealing the statue has a hollow center, and that a stash of hidden pirate treasure is stored within. While loot-happy adventurers can’t simply pillage the treasure, fear not! There’s a quest in Zul’Gurub that allows aspiring pirates to take their cut!

Everyone’s favorite dashing Outlaw, yours truly, has already taken his fair share of the treasure. But don’t worry, I’ve enlisted the help of a friendly local Demon Hunter to guide you along the rest of the questline and help you secure your cut of the booty! To start, you’ll want to head into Zul’Gurub in Northern Stranglethorn (circled above) and talk to Overseer Blingbang. He’ll then give you a quest, [Booty Bay’s Interests]. To complete this quest, first kill Bloodlord Mandokir and High Priestess Kilnara (highlighted on the map below).

Mandokir and Kilnara can also both drop mounts! An Armored Razzashi Raptor and Swift Zulian Panther respectively. Once both Mandokir and Kilnara are dead, you’ll be able to kill Jin’Do the Godbreaker on the center platform. Loot his body and return to the start of the dungeon to complete Booty Bay’s Interests and Blingbang will now offer a new quest, [A Shiny Reward]. Return to Janeiro’s point and collect your shiny reward. Fly into the side of the statue, and you’ll be able to complete A Shiny Reward. Cracking open the large treasure chest and taking a collection of jewelry, including a Tarnished Crown, Golden Necklace, Gem Studed Bracelets, and the pièce de résistance Black Ice.

Black Ice is a cosmetic toy which gives your character the appearance of having a large black diamond ring on their finger. The effect is permanent, has a 2 minute cooldown, and does not take up a ring slot, allowing you to wear your newly-earned loot wherever you go.

Next time you find yourself in Stranglethorn Vale, stop by the Statue at Janiero’s point, have a pint at The Salty Sailor, and walk away a slightly richer (and more stylish) adventurer.